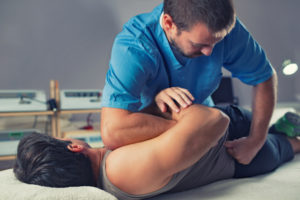 Chiropractic adjustment, also known as spinal manipulation, is a type of manual therapy to help to ease pressure on joints and improve the range of spinal motion. The therapy is often used to treat neck, back, shoulder and headache but chiropractors also use it to treat other minor ailments also.

There are more than 100 types of spinal manipulation techniques used by chiropractors. Some of these techniques are gentle while others involve the application of a controlled, sudden force to a spinal joint.

Here is an overview of the most common chiropractic adjustment techniques.

Direct thrust technique, also known as diversified technique, is one of the oldest and the most commonly used techniques, with about 96% of chiropractors using it on about 70% of their patients. In this type of chiropractic adjustment, a chiropractor uses their hands to apply a rapid thrust or impulse to align the spine. This involves taking a part of your spine (like your thoracic spine) and quickly moving it to one side (application of a rapid thrust).

This manipulative technique increases range of motion caused by misaligned joints or bones. However, it is considered more dangerous when compared to other manipulative treatment techniques due to the application of high-velocity force.

Another common chiropractic technique is Gonstead adjustment. It is a hands-on technique that involves thoroughly analysing the spinal region and realigning the spine to reduce pain and inflammation in the affected areas.

In this technique, a chiropractor uses a small handheld spring-loaded device called an activator that delivers a small impulse to the spine. The activator technique effectively adjusts the tone of the nervous system. Consequently, it is used to treat everything from neck pain and back pain to headaches (both chronic and migraine).

Also called Cox Technic, flexion-distraction is one of the less common techniques used by chiropractors. It involves adjusting your cranium (skull) and/or stretching your back gently, aligning the spine to its normal position. The adjustment is commonly used to treat facet joint pain and other conditions that cause neck and back pain.

Drop technique or Thompson Terminal Point involves specialized treatment tables that have drop mechanisms to facilitate the movement of the joint. This technique is sometimes used in place of, or in addition to, a more traditional manipulative adjustment method.

While the drop table may sound a bit frightening, the chiropractic experience is actually very comfortable.

Please take a look around our site and if you think we can help you please call 01962 861188. If you are new to chiropractic why not book a FREE SCREENING appointment with our chiropractor to chat about your problem and see if we can help.