The term chiropractic comes from the ancient Greek, cheiro, meaning ‘hand’, and praktikos, meaning ‘doing.’ Chiropractic was developed by a Canadian, David Daniel (D.D.) Palmer. In 1895 he persuaded his office janitor, partially deaf for 17 years after a back and neck injury, to let him manipulate his spine. There was a ‘click’ and the man’s hearing was improved!

Chiropractors use their hands to diagnose and treat disorders of the spine, joints and muscles. The body is regarded as a mechanism, with the spine as key support and link to the brain. When body systems work in harmony, self-healing processes can function efficiently. Because the spinal cord carries nerves to every part of the body, any distortion or strain on the spine can have far-reaching effects and cause problems. Chiropractic treatment aims to re-align the spine so that body systems can function properly. It is a purely natural treatment that does not involve any drugs or surgery.

Chiropractic’s reputation fluctuated from a dismal beginning to wide popularity in the early 20th century and then condemnation as an ‘unscientific cult’ by the American Medical Association in the 1960s. The AMA lost the ensuing legal battle in 1987 and chiropractic has now gained widespread recognition and is available in British, American and Australian healthcare systems. Since an Act of Parliament in 1994, chiropractic is regulated by law in the UK and the profession is now governed by the General Chiropractic Council which safeguards patient’s treatment by only allowing properly qualified chiropractors on its register. All chiropractors now provide a package of care that is evidence-based and widely recommended.

At Bradford House Chiropractic Clinic in Winchester our highly trained chiropractors use an array of manipulative techniques that are designed to increase the function of the joints which can help to relieve pain and discomfort. Other techniques that we may use are “pelvic blocking”, activator, dry needling (western acupuncture), ultrasound, electrotherapy, laser and massage. We will always explain these techniques to you and will only use what you, as a patient, are happy with. We believe we offer one of the most comprehensive range of treatments in the area.

If you require treatment and live in the Winchester and Hampshire areas then ring the Bradford House Chiropractic Clinic on 01962 861188 or Contact us now to book your initial appointment. 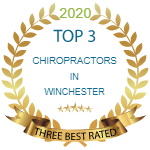